MAJESTIC WATERFALL IN THE JUNGLE – CHACHAPOYAS

Peru is known for its beautiful and spectacular landscapes: the ruins of Machu Picchu, the fabulous Lake Titicaca, the Paracas National Reserve or the Amazon River. And now also for the spectacular Gocta Falls.

Between huge and leafy mountains is majestic one of the great wonders of the department of Amazonas: The Gocta Falls. With 771 meters of altitude, it is one of the largest waterfalls in the world and, due to its incredible landscapes, reaching it is an excursion that will be marked in your memories as one of those trips that are difficult to forget.

Where is the Gocta Falls located?

The Gocta Falls are located in the department of Amazonas, specifically in the province of Bongará, in the middle of the Peruvian jungle and 50 kilometers from Chachapoyas, the closest city. Its location is a real wonder, since it is surrounded only and exclusively by nature, with incredible fauna and flora, which makes it, if possible, an even more beautiful place. 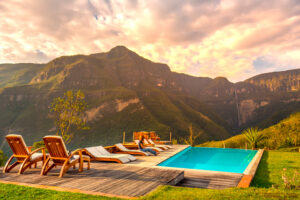 HISTORY OF THE DISCOVERY OF THE GOCTA FALLS

This waterfall was discovered in 2002 thanks to the German expeditions Stefan Ziemendorff and a group of Peruvian explorers who were working on a hydraulic project.

Ziemendorff first saw this wonderful waterfall that year when he was on expeditions in the area. But it was only in 2006 that the world was told of the existence of this waterfall. His topographical notes showed that the Gocta Waterfall measured 771 meters, being the third largest waterfall in Peru.

It should be noted that Gocta is below El Salto del Ángel, in Venezuela, at 972 meters, Tugela Falls, in South Africa, at 948 meters, among others.

The find caught the attention of the government, which subsequently campaigned to turn it into a tourist attraction that currently boosts the local economy.

It is planned that the area will become a nature reserve as the place is still virgin and there are animals in danger of extinction.

If you’ve ever been near a large waterfall, you know that it makes an impressive noise.

In the case of Gocta, the locals explain it with the legend of the mermaid:

According to that one, Arturo, a local man, used to go to chat with the charming mermaid near the falls, while telling his wife that he was practicing fireworks in a field. The mermaid offered him jewels to thank him for his good company, and one night Arturo came home, forgetting to empty his pockets.

His wife found the beautiful glittering decorations, but preferred not to say anything and follow him the next time he went to “try his fireworks.” To her great surprise, he took the path to the falls, instead of the one that leads to the fields, and witnessed the mermaid’s spell on her husband.

I had never seen him so passionate and he exploded with rage emitting a shrill cry!

This cry frightened the mermaid so much that she fell into the depths of the waterfall, dragging her husband with her.

Your luxury trip to Peru includes a selection of Andean and Amazonian landscapes. We will help you to explore this welcoming and varied country, planning each step of your trip, with the best services. With the help of amazing expert guides, you can enjoy all that Peru has to offer, every detail is well taken care of.

See Peru in comfort and style with Andean Great Treks. We’ll create a personalized Peru tour just for you, with the perfect mix of locations and activities. Discover the ancient Incan citadel of Machu Picchu with an expert private guide. Enjoy the epic scenery of the Sacred Valley of the Incas and the rich history of Cusco. Explore the wonders of the great green Amazon.

Colours of Peru calls to you with all the allure of the ancient and the mysterious. From the soaring peaks of the Andes to the lush Amazon Rainforest, from the pre-Colombian ruins in the mountains to the Spanish colonial mansions on the coast, 14 Days in Peru offers you exciting adventures and unique experiences.

THE FORTRESS OF KUELAP

THE ABODE OF THE GODS CUSCO