PERUVIAN GASTRONOMY IN OUR TREKS

Since time immemorial the Peruvian has been demanding and refined in food, used techniques, such as salting meat, dehydrating and cooking in ground ovens, for the processing of food, many of these pre-Columbian techniques are still used today. As a result of Spanish colonization, African, Chinese, Italian and Japanese immigration, Peruvian gastronomy was enriched with new preparation techniques and supplies from other parts of the world, but above all, the influence of Spanish and Chinese cuisine is highlighted.

So it has its own denomination, Creole cuisine and Chifa, the Peruvian Creole cuisine owes a large part of its success to this fusion. Due to its great variety, aroma, originality and nutritional richness it is the favorite of many tourists. When arriving in Peru, one of the main reasons for the visits of many travelers is to savor a Peruvian dish and taste its diversity of products. Peru has more than 3,000 varieties of potatoes, and many types of corn; its exit to the Pacific Ocean offers an unparalleled variety of sea food, and grains such as quinoa and legumes such as tarwi enrich the menu of Peruvians every day. For many tourists it is a pleasure to feel the tradition and the mixture of cultures in this delicious gastronomy.

The Andean region being the center of domestication of many native species, including the potato, the legacy of Peru to the world, which were constantly enriching Peruvian cuisine. Andean cuisine, which is characterized by the consumption of tubers, corn, llama meat, alpaca, trout and guinea pig. In Peru, food practices are framed within a symbolic, expressive and sensory system complex and dynamic, also becoming a reference of regional and national identity. It is a universe that contains a series of expressions and derived and identifiable elements, such as techniques and tools of ancestral origin for the production and conservation of food, native inputs, specific modes of preparation, distribution mechanisms, consumption contexts, social uses and specialists.

Peru is a country with a millenary tradition and a great future, without neglecting its roots and the art of good eating is one of the representative signs of its identity. The respect of its tradition and its roots, together with the contribution of new culinary techniques from other cultures, has made Peruvian cuisine considered among the ten best cuisines in the world. The Peruvian food is wonderful, the abundance of ingredients of excellent quality, the passion and the good taste that every Peruvian puts, has made Peruvian cuisine recognized worldwide. The evolution of Peruvian cuisine is surprising, many inputs from different regions are being incorporated into the kitchen, as some fruits of the Amazon used in the preparation of various recipes.

Peruvian cuisine is our great passion. With each of our dishes we seek to explore a variant of it, a new language that reinterprets it and places it in the place it deserves in front of the kitchens of the world. Knowing our proposals one by one is a journey through the infinite possibilities of our cuisine and deserves to be tasted from start to finish. We feel fortunate to operate in a city full of magic, which allows us to collaborate with the development of small farmers and high Andean communities that provide us with their freshest, best quality products from the region. Today we are committed to spreading the nuances of Peruvian cuisine, focused on a culture of details. Undertake this amazing journey through the kitchens of the world through ours and discover the magic of ancestral and profound Peru. 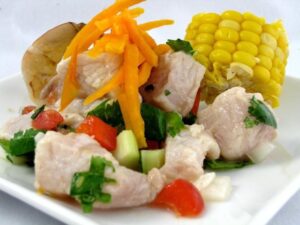 MAIN INGREDIENTS OF THE PERUVIAN GASTRONOMY

There are several basic ingredients that are commonly used in Peruvian food. One of them is corn, which exists in different varieties. An example is white corn, called “Choclo”. Choclo can be eaten alone (after boiling or steaming) or combined with other dishes such as ceviche or soup. In Peru there is also a type of purple corn, with which traditionally a soft drink called “chicha morada” is prepared. This juice is full of antioxidants, and it is made by boiling the corn with pineapple, cinnamon, cloves and sugar to give it more flavor.

Another main ingredient in most Peruvian dishes is the potato. Of the 5,000 varieties of potatoes around the world, around 3,000 are found only in the Andes. The tubers in Peru and the Andes come in different colors, shapes, sizes and structures.

Another popular grain that grows abundantly in the Andes is quinoa. Quinoa is considered a superfood due to its high protein content, along with other benefits. In Peru, quinoa grows naturally in the valleys and is a popular grain used as a main ingredient for soups.

The most famous dish in Peru is “Ceviche”. Ceviche consists of raw fish that has been marinated in lemon juice. Raw fish is essentially cooked by citric acid, and mixed with onions, salt and some chili peppers. There are several different types of Ceviche, for example, it can be prepared with shrimp, croaker or a mixture of all types of seafood (mixed).

If you resist eating raw fish and ceviche, there are a lot of other dishes that are worth trying. For example, meat cooked on the grill (grill) or fried is always delicious.

For lovers of meat, “pollo a la brasa” may be a good option, or the popular “lomo saltado” (pieces of meat with paprika, all sautéed and accompanied with French fries). 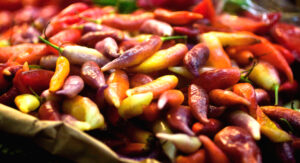 To accompany Peruvian food, there are several non-alcoholic and alcoholic beverages to try. The national drink is Pisco, which is a brandy, made from grapes. Although the Pisco process is similar to the winemaking process, Pisco contains a higher percentage of alcohol.

It is more common to drink pisco in a cocktail than alone. The famous pisco sour is made by mixing pisco with lemon, egg white, gum syrup and a trickle of bittersweet and nutmeg. Peru also has some national beers that are very popular with locals and tourists. The most consumed beer is called Cusqueña.

Andean Great Treks  has within  its staff, the best chef. Those who were selected after a rigorous review of knowledge and skills in the culinary arts.

We are true ambassadors of Peru GASTRONOMY, since the Inca trail you can taste the best dishes of Peru . Exquisite entries, main dishes, desserts.

Our chef will prepare everything on the inca trail, with the best pre-selected ingredients. All food passes quality control, with health safety standards.

If you have any food restriction or diet, Andean Great Treks can you provide, with  no extra cost.

The inca trail meals are the best, without doubt!!! 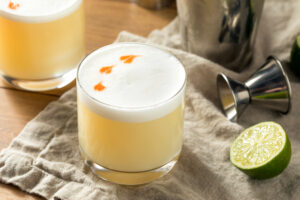 BREAKFAST IN OUR TREKS

Our breakfasts for our Treks are designed by a nutritionist, who evaluates the best and quantity of calories, which you should consume when doing a hike of high demand. That is why we use our Andean cereal foods, which have the best standards of composition in vitamins, minerals, and proteins, such as quinoa, kiwicha, wheat, beans; They are ingredients of the classic Cusco breakfast on the Inca Trail. Every day our breakfasts are very plentiful, which will surprise you in taste and quality. 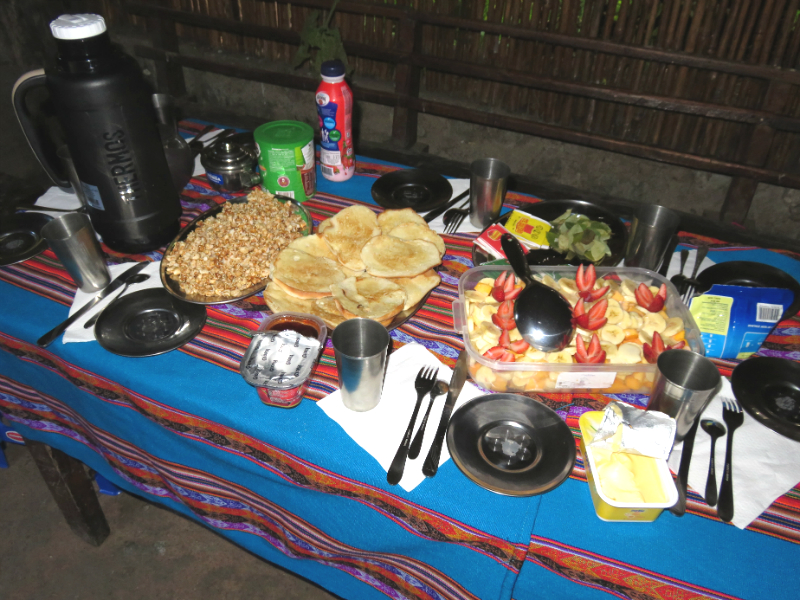 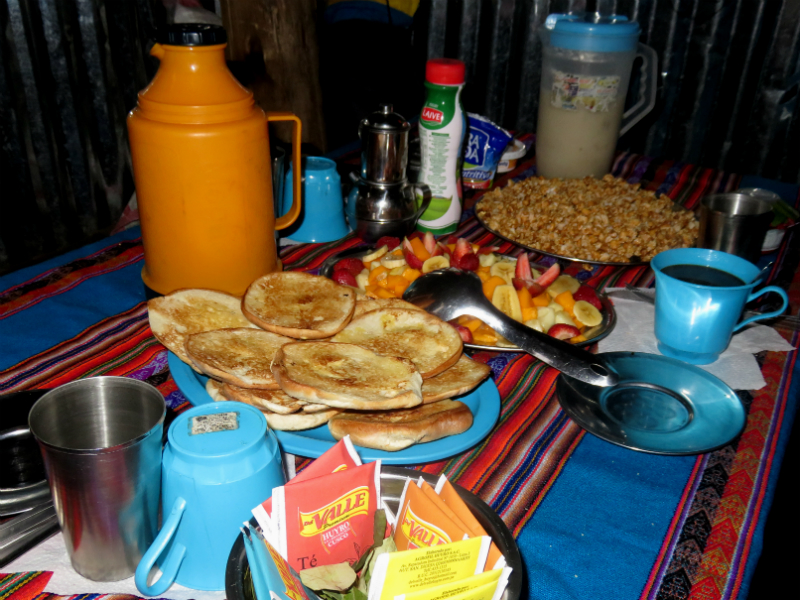 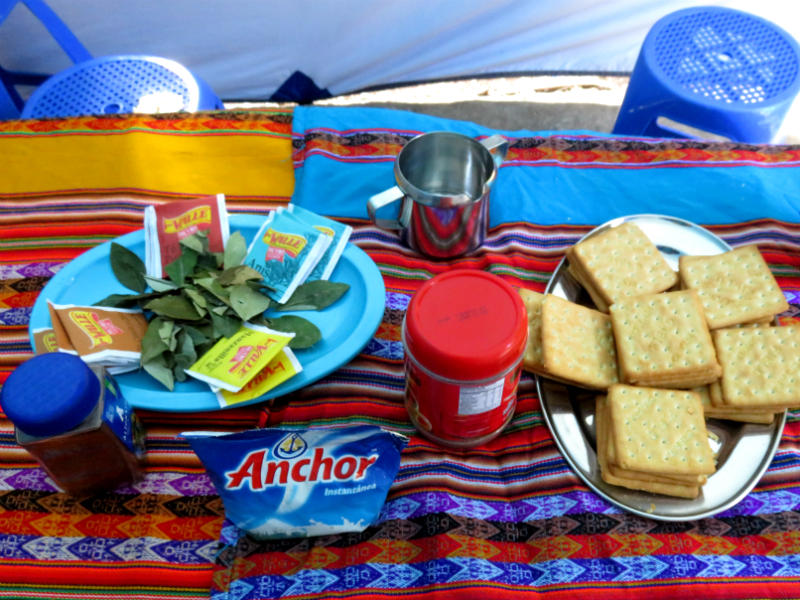 LUNCH IN OUR TREKS

If something is remembered for your whole life is our lunches, which you can taste in the most enigmatic places, as we set up the dining tent with a view of the beautiful landscape. The lunches are buffet style, with different options, if you have a very special food you can request at the time of your reservation (no gluten, vegan, vegetarian, allergic to any ingredient, etc). For example you can taste the soup of quinoa, moraya soup (dehydrated potato), cusqueño corn cream, chicken diet, vegetable soup from the sacred valley of the Incas, Solterito cusqueño, trout ceviche, stuffed avocado, Andean salad, trout garlic, alpaca in aguaymanto sauce, chicken in pineapple sauce, quinoto with andean cheese, spicy olluqito, rolled chicken, rice to the gardener, rice chaufa, spicy guinea pig, etc. And many other delights that our chefs will cook for you. Our food cards change every season, if you would like to try some food that you saw on the internet or listen to from Peru, do not hesitate to let us know at the time of your orientation, to surprise you on your trek to Machupicchu. 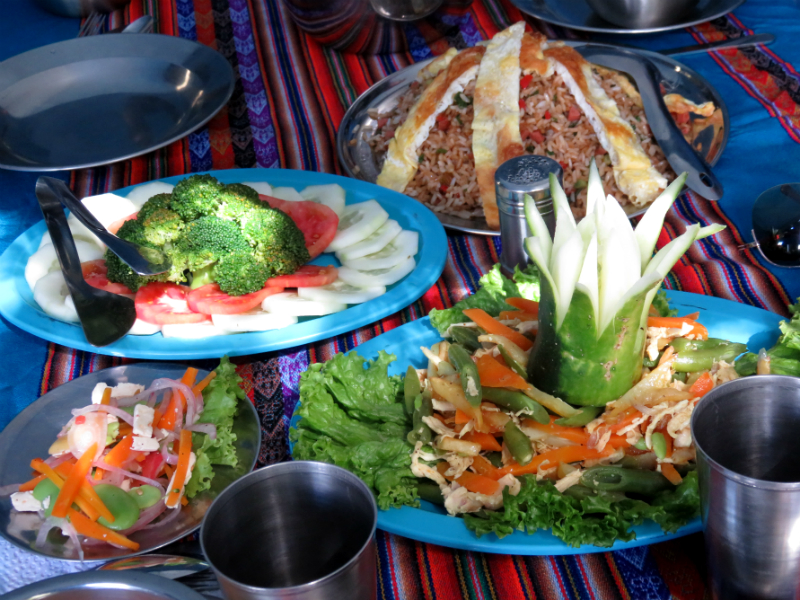 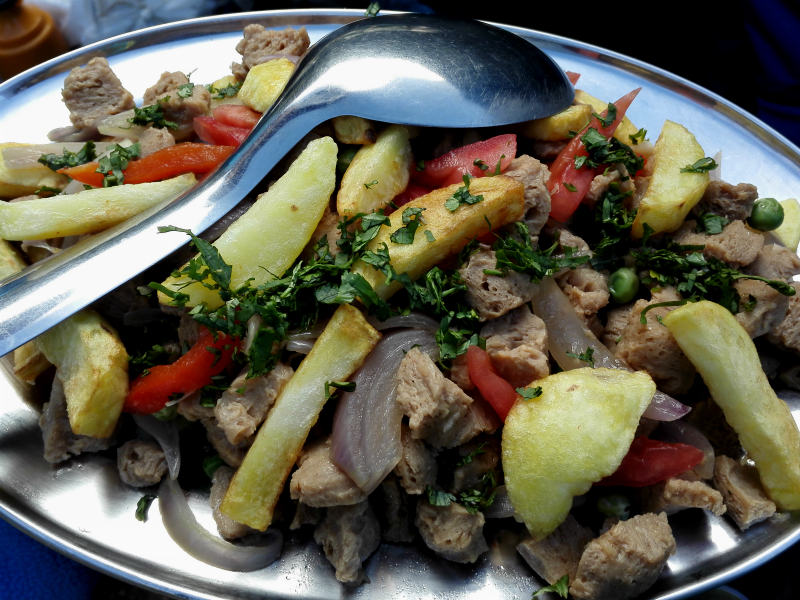 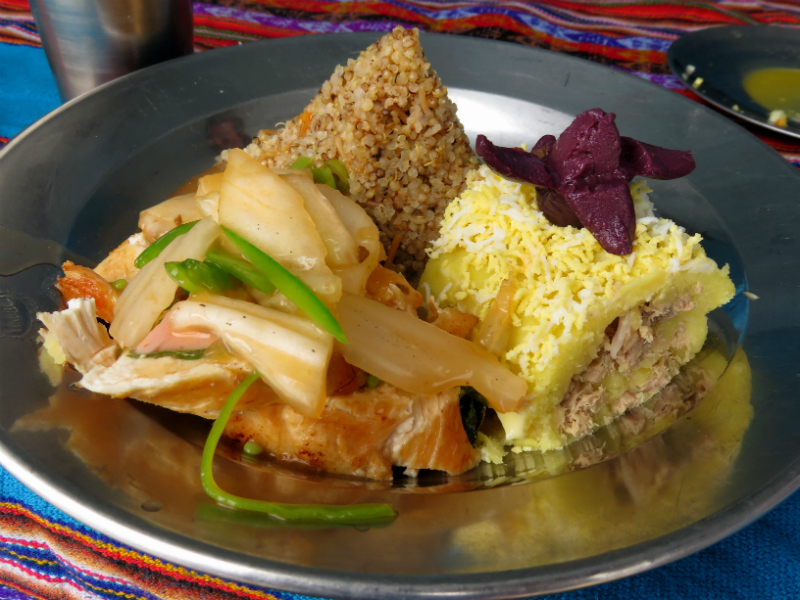 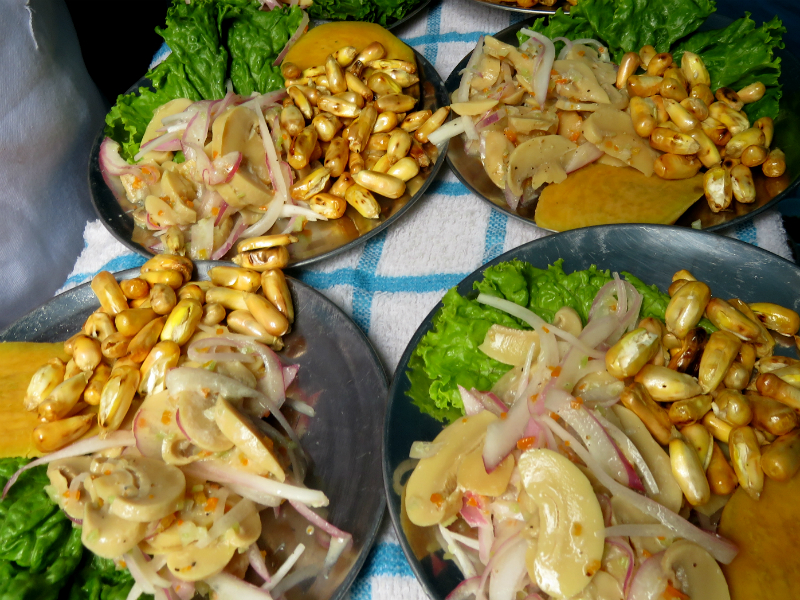 DINNER IN OUR TREKS

The dinner of our Treks has captivated all our visitors, for its flavor and dedication when choosing the best ingredients and the love that our chefs put in their preparation. Here some of the most outstanding dishes: Lomo Saltado, Chaufa, Chicken with tamarind sauce, Huancaina’s style potato, stuffed hot pepper, moraya with white sauce, chicken brochette and vegetables, mushroom and vegetable pizza, Chicken in black mint, chicken curry,etc. 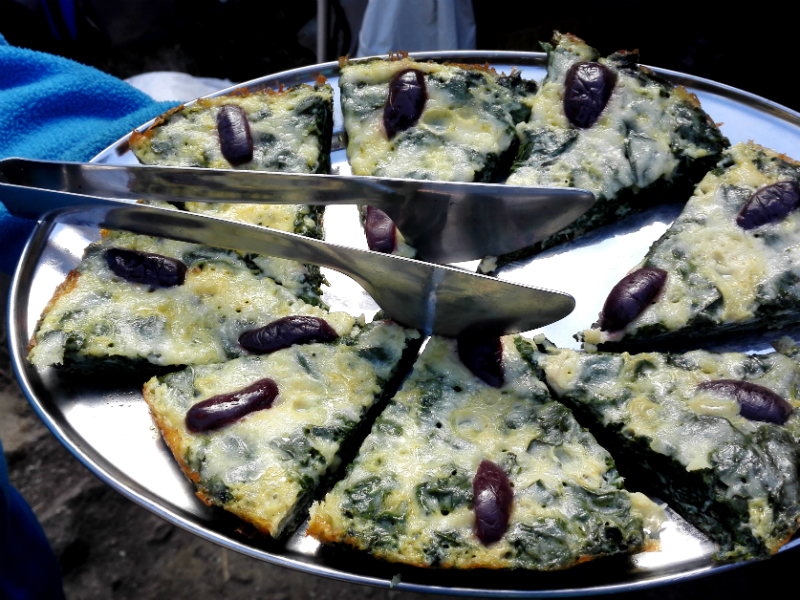 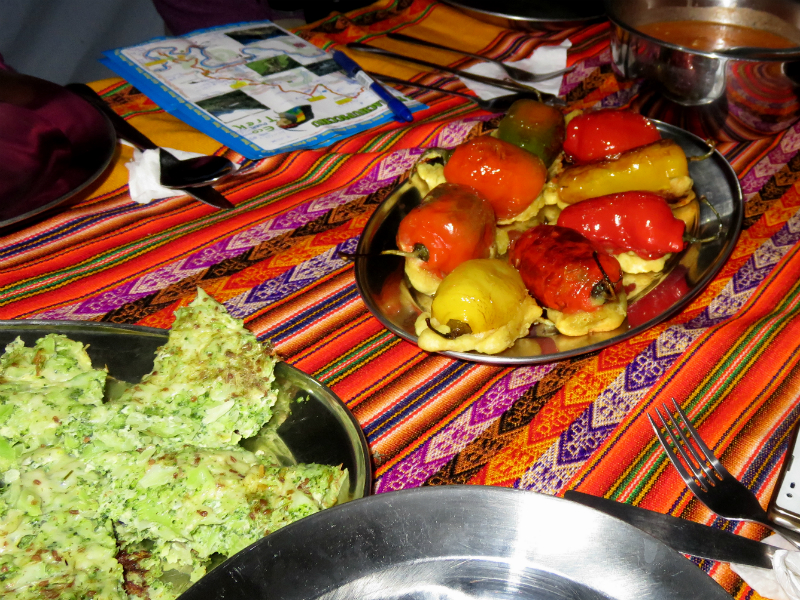 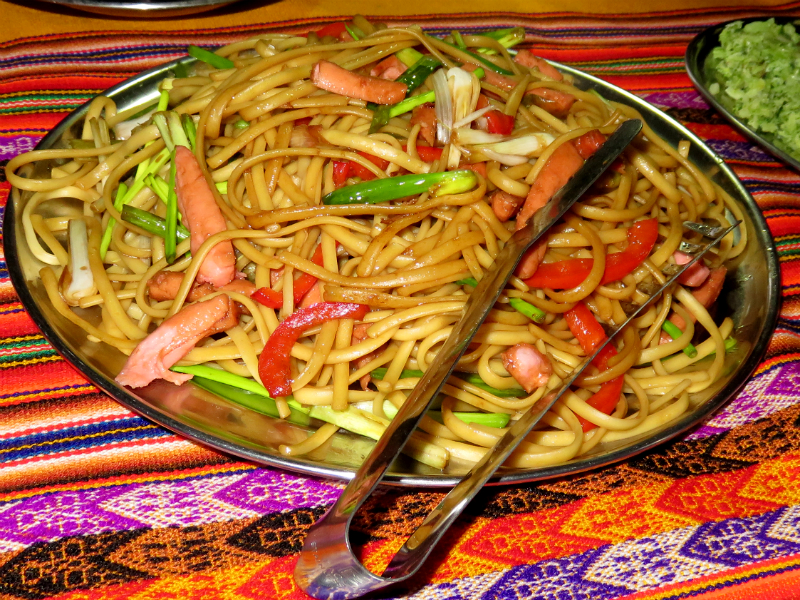 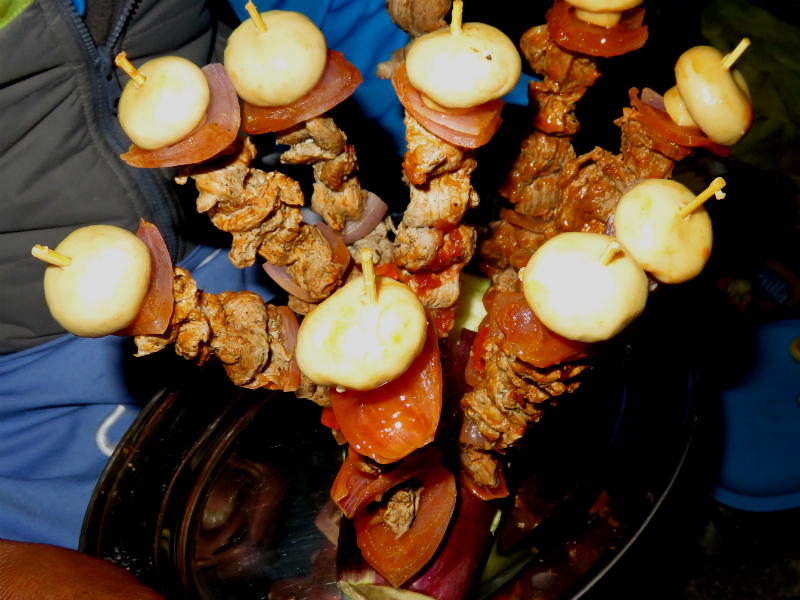 DESSERTS OF OUR TREKS

A good complement to end a great day of hiking in the Andes is undoubtedly the delicious desserts that are prepared by our expert chefs from Peru. Andean Path Trek is proud to have its best dessert menus prepared with fine ingredients from the Peruvian valleys such as Lucuma, Chirimoya, Granadilla, Pacay, Pears, Blueberries, Strawberries, Cacao, etc. And for the end of your tour in Cusco, don’t forget to celebrate with an exquisite Pisco Sour. 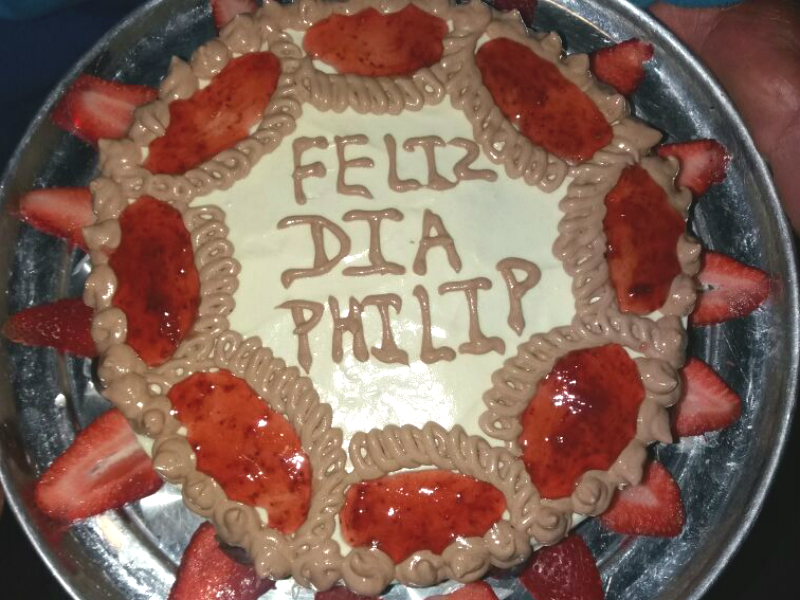 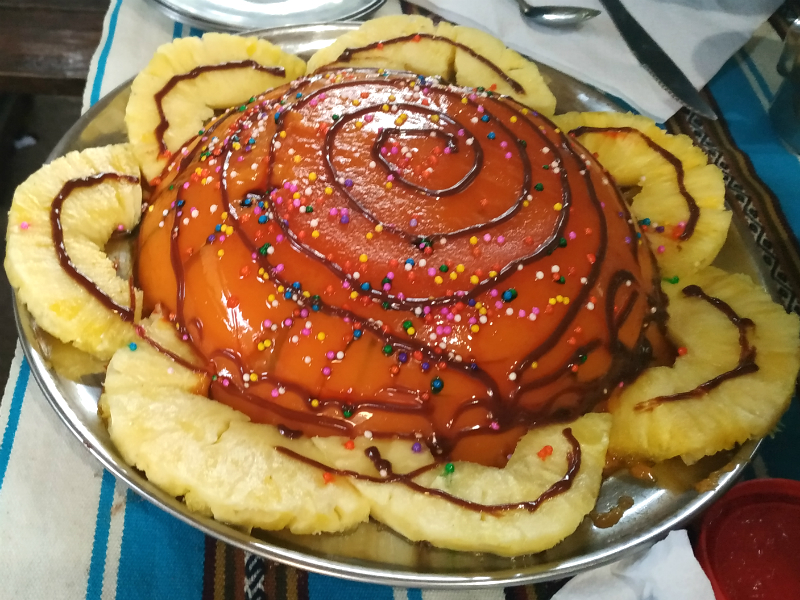 Why travel with Andean Great Treks?

SMALL GROUPS & BIG ADVENTURES
With a maximum group size is 8 on most tours, it feels more like traveling with friends than being on an organized tour. You'll meet like-minded people where everyone is guaranteed to share a passion for travel.
error: Content is protected !!