THE FORTRESS OF KUELAP

THE FORTRESS OF KUELAP: THE MYSTIC MACHU PICCHU OF NORTHERN PERU

The fortress of Kuelap, in the department of Amazonas (Peru) is the most important archaeological complex in the jungle of northern Peru. A place that you cannot miss if you are traveling through Peru, which in addition to being immersed in an incredible landscape, is the cradle of one of the most important cultures in the country: the Chachapoyas. Get ready to start a journey through this imposing building protected by a huge wall.

Until recently it was only possible to reach the place on foot. Today, thanks to the modern cable cars that depart from Nuevo Tingo, access has been made easier. However, if you are a trekking lover, you will surely want to get to the place on foot. The geography is impressive: a fortress surrounded by cliffs and precipices on three of its four sides. Around him, the heights of the Andes and the Amazon jungle blend perfectly in the landscape in a unique postcard. 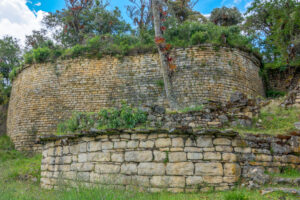 History of The fortress of Kuelap

Kuelap is considered one of the Seven Wonders of Peru and is older than Machu Picchu. It also stands out for being the largest stone archaeological center built in pre-Columbian times.

The Chachapoyas were a nation formed by a group of curacazgos. This political organization, governed by the Curaca, has left many beautiful monuments along the Utcubamba River. Little is known about the origin of this culture, although it is believed that they were farmers and merchants. The Kuelap Fortress took many years to build, more precisely since 500 AD. C to 1570 AD C. It has imposing walls up to 20 meters high that are a clear example of monumental architecture and state-of-the-art engineering. Due to its strategic location, Kuelap was designed for defensive purposes.

About three thousand people lived inside the Fortress of Kuelap and another seven thousand around it. However, they were only a small part of the 400,000 inhabitants of this civilization, which populated the current regions of San Martín and Amazonas. In 1532, the Spanish Diego de Alvarado, after conquering the Incas, arrived in Kuelap and moved all its inhabitants to a new city. These towns, which the Spanish knew as “indian reductions”, were settled in the lower parts of the valleys, with easier access.

The city fell into oblivion, until, in January 1843, Juan Crisóstomo Nieto, judge of Chachapoyas, arrived in the valley of the Utcubamba River to mediate in a judicial conflict. As he walked through the land, the local inhabitants directed him to a place where a large fortress stood, hidden by the undergrowth. From that moment Kuelap, which had been abandoned for almost two centuries, was opened to the West.

During the following years, The fortress of Kuelap began to attract the interest of important researchers who dedicated themselves to the study of the place.

Where is the fortress of Kuelap located?

The Kuelap archaeological complex is located in the department of Amazonas, province of Luya. This important archaeological complex is located in the upper part of the Utcubamba river valley, at 3,000 meters above sea level. Next to it is the Fortress of Kuelap hamlet, in the Tingo district, Luya Province. As a reference you can take the modern city of Chachapoyas, 35 kilometers to the south.

Thanks to this work, the number of tourists visiting the Kuelap fortress grew remarkably. Even the prestigious National Geographic Traveler magazine highlighted this destination as an unmissable place to visit. The Kuelap cable car system was built respecting the natural environment and the biodiversity of the place. For this reason, the departure platform rises to 2279 meters high. The remaining meters to the top pass in the middle of landscapes and panoramic views of the Valle Alto del Utcubamba. The cabins ascend at a speed of 6 meters per second, suitable for taking photos and filming videos. In addition, they are equipped to receive wheelchairs, which allows people with reduced mobility to also get to know this wonderful place.

How is the fortress of Kuelap made up?

The Kuélap Archaeological Complex is made up of 8 sectors that cover an area of ​​approximately 450 hectares. Of these 8 sectors, The fortress is the one that stands out the most and the most studied to date. La Barreta is the sector that has an area of ​​sarcophagi and burials, terraces and rural residence areas. To the south is the sector known as Malcapampa, which is believed to correspond to a projection of the Fortress sector that was never finished being built. The other sectors are: The Empire, The Lirio, San José and Pumacanchina, located in the central part of the complex. These sectors contain a set of rural neighborhoods associated with cultivation areas and terraces. The last sector, known as Petaca, is located in the western part of the complex and has a set of very destroyed sarcophagi.

Your luxury trip to Peru includes a selection of Andean and Amazonian landscapes. We will help you to explore this welcoming and varied country, planning each step of your trip, with the best services. With the help of amazing expert guides, you can enjoy all that Peru has to offer, every detail is well taken care of.

HOW TO CHOOSE TREKKING POLES?

HOW TO IDENTIFY AND TREAT ALTITUDE SICKNESS