THE LARGEST ADOBE CITY IN AMERICA

The ancient citadel of Chan Chan is considered the largest pre-Columbian adobe building in the world. Without comparison worldwide, its extension and quality of its reliefs have made it famous, and it annually receives visitors from all over the world.

Chan Chan belongs to the Chimu culture, which built an empire in the coastal valleys of the La Libertad region more than a thousand years ago. The citadel itself dates back to the 9th century AD, and its name means “Sun Sun”. Its size, complexity and structure suggest that it was the most important urban and administrative center of the Chimu empire.

Chan Chan stands out for its adobe walls, which have stood the test of time, have a trapezoidal shape and reach a height of up to twelve meters. These walls were joined with mud, and supplemented with wood and straw to form lintels and roofs.

The sector known as the citadel is made up of various houses (Chayhuac, Big House, Little House, Bird House, etc.), which are believed to be the rooms where the Chimu rulers would have lived together with their court. The sector stands out for the excellently crafted high-reliefs that decorate its walls, with motifs of birds and fish. The curious thing is that, when they died, the houses of the rulers became their tombs, along with a good part of their court.

Within the complex there is currently a site museum, which keeps on display various objects found in the excavation of Chan Chan, such as Chimu pottery, stone pieces and bone remains.

The citadel of Chan Chan is located in the Moche Valley, facing the sea, halfway between the resort of Huanchaco and the city of Trujillo, capital of the department of La Libertad on the north coast of Peru. The archaeological site covers an area approximately 20 square kilometers. The central area is made up of a set of 10 walled enclosures (called “citadels”) and other solitary pyramids. This central set covers an area of ​​approximately 6 square kilometers. The rest is made up of a multitude of small poorly preserved structures, paths, canals, walls and cemeteries. 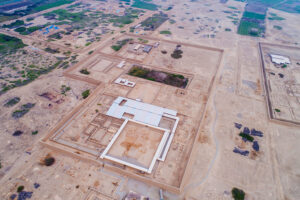 Chan Chan stands out for one main feature: being the largest adobe citadel in America. And it is that this place occupies nothing more and nothing less than 20 square kilometers.

But what you will find in these archaeological ruins is much more. Chan Chan has hundreds of stories waiting to be told, every detail of this construction has a meaning that will make you know the thought of the Chimú culture. The importance of Chan Chan in the Chimú era is undeniable: this place was considered the capital of the entire kingdom and the great Chimú, the maximum leader of this culture, lived here. 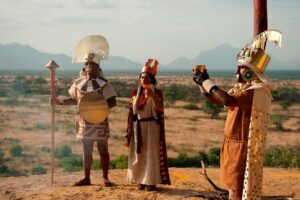 Chan Chan was made up of a total of ten citadels, among which were more than 100,000 workshops, pyramidal temples, streets and walls. It is estimated that between 60,000 and 100,000 people lived in this labyrinthine framework. The walls of Chan Chan are a wonder to behold: all of them are delicately decorated with high reliefs showing everyday things of the Chimú culture, especially those related to nature: waves, birds, fish…

The Chimús reigned with great power from this place and also used its surroundings for day-to-day activities and sacrificial rituals. In fact, in 2018, just a few kilometers from Chan Chan, a group of archaeologists discovered 140 child skeletons and 200 baby llamas from what is believed to be the largest known child sacrifice in all of history.

To build this city, materials from the region were used. The citadels were built using adobe walls on stone foundations joined with mud, wider at the base and narrower at the top. To build floors, wall fillings, ramps and platforms, broken adobe was used, together with earth, stones and other debris. The wood was used to make posts, columns, and lintels. Cane, reed and mat were also used. The roofs were made by weaving bundles of straw. 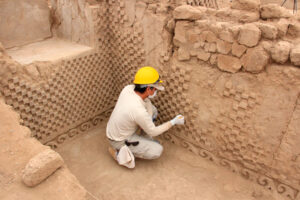 One of the details that current visitors most admire is the great beauty, variety and number of walls decorated with high reliefs. These were made with molds and decorated the walls of patios, audiences and corridors, inside the citadels. The most common decorative motifs were geometric combinations, but representations of fish and birds are also common.

For the archaeologist Kolata, Chan Chan was not built in a single moment, and based on the study of the adobe, he proposes 3 moments in the urban history of this city. Stage one corresponds to the original nucleus, formed by the Uhle and Chayhuac citadels. Later it grew to the west, with Tello and Laberinto, the latter the first to use the tripartite division of its interior space. In stage two, Gran Chimú and the buildings in the north and west sectors are built. Stage 3 is marked by the construction of the remaining 5 citadels.

The architectural form in which Chan Chan is organized reflects that there was a strong stratification, with different social classes occupying different areas and buildings according to their economic condition. The citadels are protected by high walls and have a single access, facilitating the control of those who entered and left.

The organization of the citadel is given by three sectors: north, central and south.

This museum is located in the same archaeological complex, the objective of its creation is to preserve and exhibit in its rooms all the findings found during the investigation of this complex.

Within which you can see pieces of ceramic remains, textiles, idols, metal works, among other structures that were found during the excavation of the site, as well as the exhibition of archaeological pieces, the museum offers the option of visiting the audiovisual room, in which the history of the ancient town of Chan Chan is projected in a modern way.

In addition, the museum seeks to promote the conservation of the archaeological heritage through restoration-oriented workshops, for example among the workshops we find conservation of ceramics, textiles, metals, among others.

Adults only 11.00, with discounts for older adults, children and university students.

The top sights of Peru will leave all the family thrilled by the scenic grandeur, ruined temples, colonial cities, amazing inca trail to Machu Picchu, the Inca Lost City, once buried under the tropical forest which surrounds it.

MANU THE AMAZON RAINFOREST NEAR CUSCO

QUELCCAYA: THE LARGEST TROPICAL GLACIER IN THE WORLD