THE MYSTERIOUS NAZCA LINES OF PERU

The Nazca Lines are located 450 kilometers south of Lima, in the department of Ica. Due to its many attractions, it is a city with a lot of tourist activity, with visitors from different cities in the country as well as from abroad.

We owe much of what we know about these lines to Maria Reiche Newman (1903-1998), a German archaeologist and mathematician, nationalized Peruvian, who dedicated her entire life to conserving, researching and making known to the world the enormous geoglyphs, converted today one of the main attractions of our country. For this reason, near the lines you will find the House Museum that bears his name, where he explains part of his research. 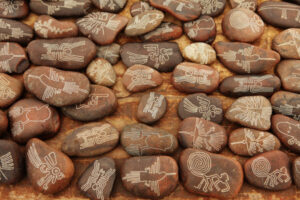 HISTORY OF THE DISCOVERY OF THE NAZCA LINES

Since the time of the conquest there are references to this cultural heritage.

In 1547, the Spanish conqueror Pedro Cieza de León gave some indications about the existence of geoglyphs. Later they were cataloged as roads. Then, in 1932, after several sightings by commercial and military pilots, archaeologist Julio César Tello considered them sacred highways.

Since then, the lines have fascinated scientists such as Toribio Mejía Xesspe, John Rowe, Max Uhle, Paul Kosok and his German colleague María Reiche Neumann. The works of Kosok and Reiche determined the antiquity of the lines and the anthropologist considered them the oldest calendar with the largest world scale.

María Reiche Neumann dedicated her entire life to studying these geoglyphs, giving the first explanations about their purposes, spreading the legacy of this culture.

MEANING OF THE NAZCA LINES

Much has been said about the meaning of these lines. For some it is a way of communicating with the gods, while for others they are sacred paths or meeting places. Also, they can be a sign of worship to certain mountains.

The geoglyphs are shaped like monkeys, hummingbirds, spiders, some fantastic beings, geometric figures, among others; and, for the scholar María Reiche, they were part of an astrological calendar that sought to represent the movement of the stars.

For the Historian Maria Rostworowski it is a family tree for the god Kon. This would be in charge of leaving water to the Nazca and Paracas cultures. Its relationship with water is also pointed out by the Hydrologists, since they mention a connection between the underground water deposits, found near the place, and the lines.

There are hypotheses that indicate that these were places of sacrifice or a huge loom. There are also indications that they were sacred paths of communication between temples or landing strips for aliens.

THE MYSTERY OF THE NAZCA LINES

The Nazca Lines were created during the time of the Nazca Culture, who covered this territory between 200 BC and 700 AD. They are composed of various geometric figures, phytomorphic (plant or vegetable form) and animals.

It is precisely the latter that are the most striking gigantic lines (some of up to almost 300 meters in length), such as those that form the figure of a lizard, a monkey with a spiral tail, a condor, a hummingbird, a spider and even that of a man who looks like an astronaut.

Any time of the year is good to visit the Nazca lines, although sometimes unforeseen events can occur, such as sandstorms that can hide the figures from view or problems that make it difficult or delay the flight.

VIEWPOINTS OF THE NAZCA LINES

If you don’t like to fly or want to complement your flight over the Nazca lines with a closer visit, you can go up to the viewpoints.

From the city there is a bus that runs along the road in the direction of two viewpoints. You can get off the most popular of all, which consists of a tower that you can climb for 7 soles and contemplate the figures of the hands and the tree up close.

Then you can walk about 15 minutes to the second viewpoint. From there no more figures can be seen, but you can see an impressive view of the valley from which several lines and trapezoidal shapes project, crossing each other, thus forming a curious network of infinite lines.

The same bus or a taxi can take you to Maria Reiche’s house. This German researcher dedicated her entire life to the study of the Nazca lines and fought for them to have the protection and conservation they deserve. His house is now a museum where you can learn about how he lived and his method of studying lines.

Dive deep into the culture and landscapes of Peru with this adventure to Machu Picchu, the Amazon and more. Search for wildlife along jungle trails and rivers in the rainforest from a comfortable lodge then head up into the Andes to Cusco, the capital of the Inca empire.

HOW TO CHOOSE TREKKING POLES?

HOW TO CHOOSE A SLEEPING BAG FOR HIKING

HOW TO IDENTIFY AND TREAT ALTITUDE SICKNESS