EXPLORE THE SPRING OF THE ANCIENT ANDEAN CIVILIZATIONS

VISIT THE TEMPLE OF CHUCUITO & ANCIENT ASTRAL GATE OF AMARUMURU

Archaeological sites in Puno are Peru’s oldest civilizations. In Lake Titicaca the largest Pucara, Tapara and Tiahuanaco cultures arise, which give rise to the powerful Inca Empire. 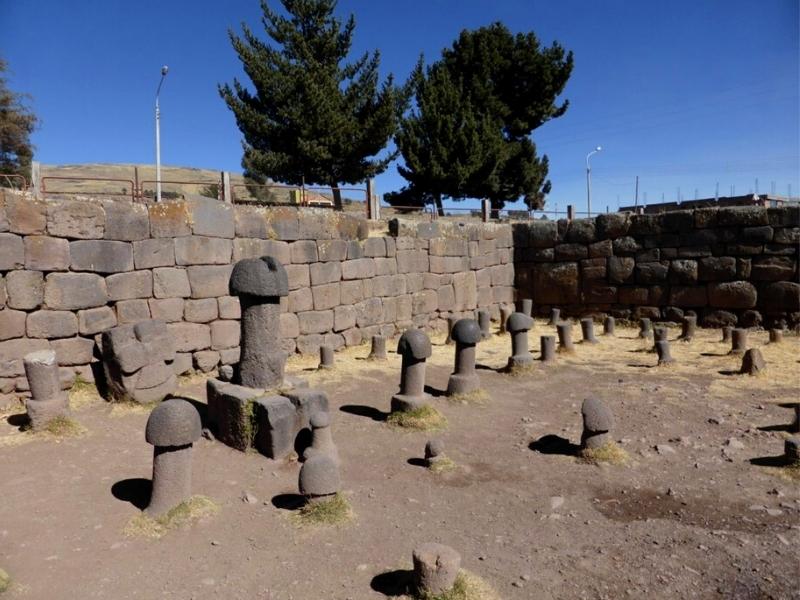 Chucuito is one of the few ancient sites in the world that is likely to elicit a few giggles. In many ways, you’re supposed to giggle when you walk through the walled-off complex covered in row after row of stone phalluses. Especially considering that this supposed ancient fertility clinic may just be a hoax catering to the immaturity of tourists.

For more than half a century, archeologists and anthropologists have studied Chucuito Temple of Fertility, and have decided, with some debate, that the stones were placed in this order more recently than they were quarried and cut. Scientists even discovered that many of the stones were not originally set straight up, indicating that a perverse opportunist may have had a hand in the temple’s creation. Yet the findings of the scientists mean little to locals who work day in and day out to dispel these claims by giving tours of the temple.

Altogether, there are 86 phallic stones in the temple, and some even stretch to five feet. According to legend, and most tour guides in the city, this temple was frequented by women trying to get pregnant. Under the guidance of a spiritual leader, women would climb aboard the mushroom rocks and be doused in chicha, traditional Peruvian corn beer, which allegedly helped them become pregnant.

Adding to the confusion created by this legend, the site, which is named Inca Uyo, can be translated two ways. In Quechua, it means field, a perfectly logical translation. But a more modern twist translates the word into penis, which unfortunately fits the other side of the debate similarly well.

Although no definitive answer will ever be discovered, the rocks resemblance to male genitalia remains uncanny.

Know Before You Go

The easiest way to get to Chucuito and the Temple is to take a public bus south from Puno towards Juli. The bus ride will cost a nominal sum and take 20 minutes along the western bank of Lake Titicaca. Locals in town can point you in the direction of the temple. 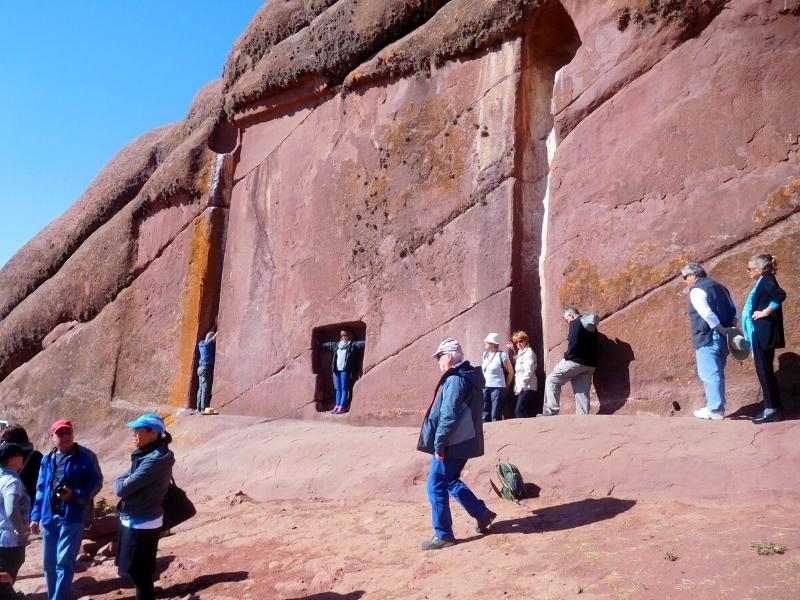 An abandoned Incan construction project left behind a mysterious “doorway.”

In the early 1990s, mountaineering guide Jose Luis Delgado Mamani was exploring the Peruvian countryside when he came across an area where the rock had been smoothed to a flat surface and adorned with a small alcove.

Known as Aramu Muru and located on lake Titicaca near the border with Bolivia, the flat stone is roughly 23-feet square, with a T-shaped alcove some 6 feet, 6 inches tall carved into it. What purpose the space once served is unknown, but the most likely explanation is that it was an abandoned Incan construction project. Locals are said to call the doorway the “Puerta de Hayu Marca,” or “Gate of the Gods,” and local legends apparently speak of people disappearing through the doorway as well as of strange sights, such as “tall men accompanied by glowing balls of lights walking through the doorway.”

But as much of this type of reporting comes back from those who believe the doorway to be some kind of portal—such as paranormal writer Jerry Willis, who claims to have traveled through the doorway—it is hard to know which “local legends” are legitimate. And photographs of people goofing off in and around the “multi-dimensional portal” do little to add to its mystique.

Know Before You Go

Travel to Puno, near Lake Titicaca, from there take a car/bus to Juli, then from there walk to the ruins.

ALL ABOUT AUSANGATE TREK PERU

ALL ABOUT THE INCA TRAIL TO MACHU PICCHU

What our clients say about us

Me and my family did a tour to Machu Picchu by train, our travel assistant Elmer has coordinated all the details of the trip very well for us. In Machu Picchu the Retama hotel staff picked us up from the train station, the room was very comfortable and spacious. Our guide in the Inca citadel was very attentive and explained many things to us, we also had the opportunity to climb the Huayna Picchu mountain, I recommend going with Andean Great Treks on your next trip. ...
Asa Backman Tour Machu Picchu by Train 2 Days
Fue una experiencia increíble! Los guías que tuvimos fueros excepcionales, tanto el primer día en Chinchero, Urubamba y Ollantaytambo con Junior, siempre pendiente de que estuviésemos disfrutando la experiencia, muy simpático y agradable. Como en Machu Picchu con Eric, un guía con un increíble y vasto conocimiento del lugar, nos dio muchísimo datos y explicaciones que casi nos hizo sentir que estábamos en tiempo de los incas. Fue además nuestro guía privado, sólo para nosotros dos y desde luego marcó la diferencia. Tanto que ya estamos pensando en hacer el Inca trail! Por otro lado, todo estuvo muy bien organizado, los trenes, buses, personas esperando en la estación con nuestro nombre en el cartel, y el hotel en Aguas Calientes también estupendo. Desde luego para repetir 😊 ...
Patricia Mencia Machu Picchu + Sacred Valley 2 Days
I did the Ausangate & Vinicunca Rainbow Mountain 3 day/2 night. I couldn't recommend Andean Great Treks enough. They took care of every detail and ensured that we had an unforgettable hike. Their camp setups each night was perfect, they brought the best chef on our hike who cooked us delicious, local 3-course meals for breakfast, lunch, and dinner each day; and our guide (Cirilo) was the best guide you could ask for -- extremely knowledgeable about the terrain, customs, and people. He also made our adventure more fun and was able to take steps to help us deal with altitude sickness. ...
Pascale Geissberger Ausangate Trek & Rainbow Mountain
I completed the Salkantay Trek with Andean Great Treks with Ernesto. I had the most amazing experience with the best group of people. This was all made possible by the organisation of the company alongside the enthusiasm, knowledge, and kindness of Ruben! The tour was very informative from a historical perspective too. I feel very grateful to have had the opportunity to complete this trek and to have had such a positive experience and would advise others to use this company too! ...
Jacqueline Seewer Salkantay Trek to Machu Picchu 5 Days
I had an absolutely amazing time on my trek. My tour guide was Ruben and from start to finish he made sure our group knew what to expect and had all our questions answered. The hike and views that went along with it were breathtaking. A challenge, but so worth it at the end of everyday. The accommodations and food that were included were also fantastic. Highly recommend! ...
Sascha Haltiner Salkantay Trek 5 Days
Wir haben die Tour in der Kulturzone 4T/3N gemacht und waren absolut begeistert. Die Organisation, das leckere Essen, die freundlichen und kompetenten Guides, die Unterkunft, eigentlich alles war zu unserer vollsten Zufriedenheit. Vielen Dank für alles Andean Great Treks. ...
Sharon Hesp Manu Amazonas Regenwald 4 Tage
SEE MORE REVIEWS
error: Content is protected !!