Visit the Nazca lines in the Ica desert

The Nazca lines are ancient geoglyphs located in the Peruvian department of Ica, which were traced by the pre-Columbian Nazca culture developed in that area between the 1st and 7th centuries AD. c.
The desert plains also known as pampas, located in the cities of Nazca and Palpa, have been recognized worldwide for their great concentration of figures and lines on desert surfaces; these manifestations have received the technical name of geoglyphs (figures built on plains or slopes).
It is about 300 geoglyphs, which represent plants and animals, as well as various geometric shapes such as spirals, zig-zag, trapezoids and triangles. As for its size, it is usually varied. However, many of the lines are so large that they cannot be fully seen from the ground.
Although the Nazca geoglyphs are one of the most important pre-Hispanic representations, they are not the only traces recorded on the Andean coast. In fact, only on the Peruvian coasts have been found up to 40 places with geoglyphs; this indicates that the use of these manifestations was a very common and highly diffused practice among ancient Andean cultures.
The drawings have been preserved in good condition due to the extreme aridity of the area. However, some paths were lost due to the passage of passers-by and tourists. In addition, the lines have also lost some of their beauty thanks to the oxidation process of the desert surface.
Currently, the Nazca lines are considered Cultural Heritage of Humanity, thus proclaimed by UNESCO, and are protected by Peruvian legislation, which is responsible for restricting the entry of people in order to prevent deterioration or alteration of the forms.

How were the Nazca lines made?

Currently, it can be said that the designs were made from two simple techniques. The first consists of the removal of the surface level of the desert soil, covered with rusty stones. This allows the underlying chalky terrain to be exposed and to appear much clearer.
This technique is known as “sgraffito” or “negative technique” and is a selective scraping of the desert surface. The second technique is called “positive” and consisted of the formation and stacking of a set of stones in the outline of the drawings. Light and dark stones were used in this method, in contrast to the reddish color of the desert.
Both techniques can appear combined in many of the geoglyphs, however, in most of the figures the sgraffito predominates. 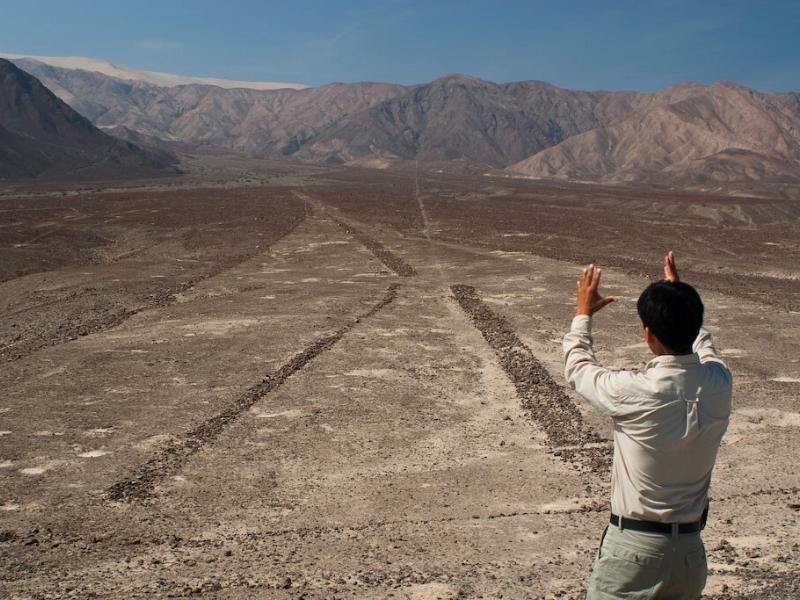 As mentioned above, researchers have been able to establish who built the geoglyphs and when they did so.
Archaeological studies carried out in Nazca identified a long cultural sequence, however, the geoglyphs are related to the Nazca and Paracas cultures. In addition, it is known that they were made approximately between the years 600 B.C. and 1200 AD
Instead, the reason for these cultures to make the geoglyphs is still a matter of debate for researchers. There are about twenty theories in the scientific literature on this subject; even pseudoscientific theories have been raised.
The author Jaroslav Klokoeník, through a historical review of scientific research on Nazca, managed to establish that the most complete theories are those that understand the problem of the lines from a holistic perspective, which is necessary to address the phenomenon through the context of the ancient cultures that created them.
Therefore, the best explanation consists of a combination of calendrical, astronomical, social, ritual and economic aspects. It should be noted that few Spanish chroniclers made mention of the geoglyphs, however, there are colonial documents where it is stated that the geoglyphs were of great ceremonial importance. 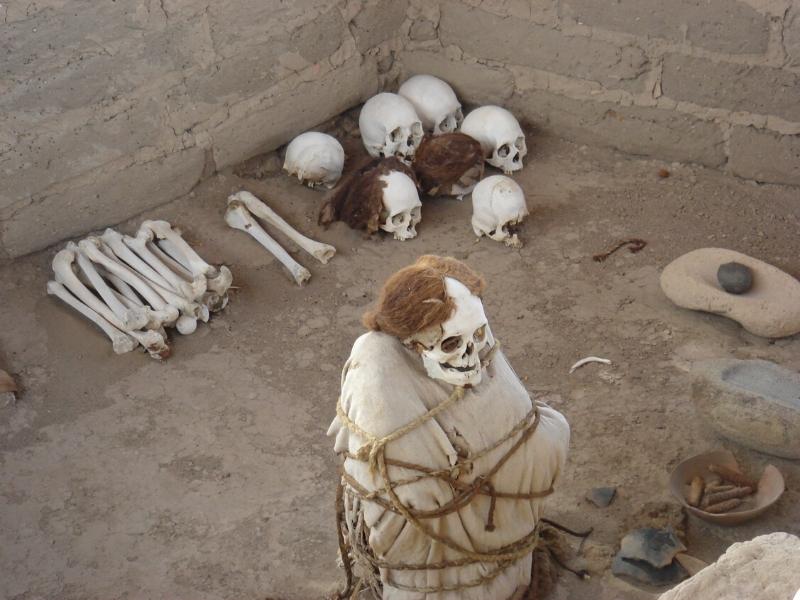 The Geoglyphs were created by different groups

Researchers from Yamagata University, led by Dr. Masato Sakai, have presented their findings at the annual convention of the American Society of Archaeology, which was held last April. To understand the relationship between the different images, Sakai and his colleagues analyzed the location, style and construction method of the new geoglyphs and found that there are four different types of figures that tend to cluster on different routes, all with the same destination: the pre-Inca city of Cahuachi. Today only one pyramid remains standing, but between the years 1 and 500, when the city lived its splendor, it was a first-class pilgrimage center and, clearly, the capital of culture born. Researchers have discovered that geoglyphs not only vary in shape, but also in type of construction. Some figures are formed after removing the stones from their interior and others after moving their edges away. According to Japanese archaeologists, the Nazca figures were built by at least two well-differentiated cultures, with different techniques and symbolism, which can be seen in the geoglyphs that trace the path from their area of ​​origin to the city of Cahuachi. 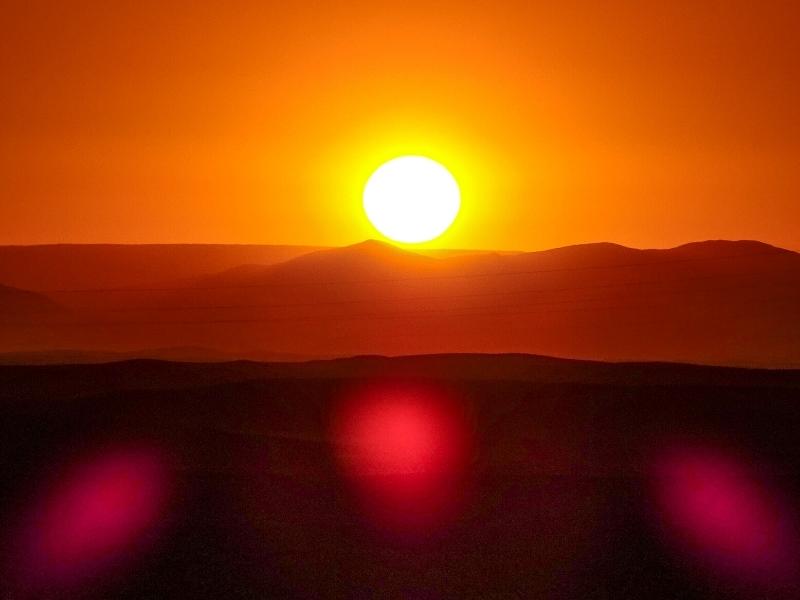 Theories about the Meanings and Functions of Geoglyphs

Due to the fact that these monumental lines can be seen from the air, many speculations have arisen to explain their purpose.

Landing strip for aliens:
In 1971 a writer named Erich von Däniken, surprised by the characteristics of this place and assuming that its elaboration had been very complex, maintained that the Nazca geoglyphs were a landing strip for alien ships.
Tracks for pre-Hispanic Olympics
In 1980, Georg A. Von Breunig argued that they could be race tracks to celebrate a kind of sports competition days, that is, a kind of Olympics, although they would be of a ritual type.

Religious purpose:
In 1977, Jim Woodman’s theory would posit that the Nazca lines had religious purposes. Therefore, they would have been made to be observed by the gods and even by people who could have risen in the desert in aerostats. This implies that Woodman hypothesized that the Nazca culture handled elements of air navigation. 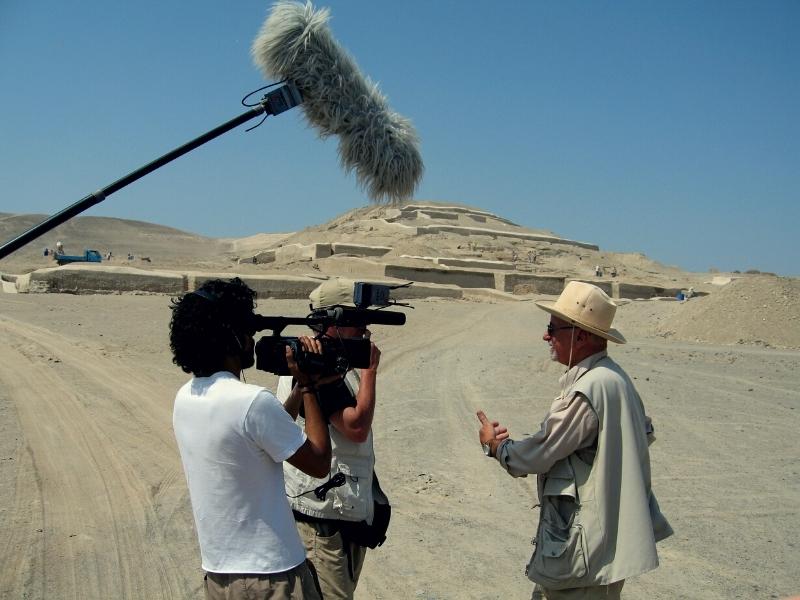 The astronomical theories of Kosok and Reiche remained true until the 1970s, when a group of American researchers traveled to Peru to study the geoglyphs. This new wave of studies began to find holes in the archaeoastronomical hypothesis about the lines (not to mention the radical theories of the 1960s linking the lines to aliens and ancient astronauts).

Johan Reinhard, National Geographic Explorer-in-Residence, brought a multidisciplinary perspective to the analysis of the lines: “You have to take into account the huge ecological system, what is around Nazca, where the Nazca peoples were.” In a region that barely receives 20 minutes of rain a year, it is clear that water is an important factor.

“It seems likely that most of the lines did not point to anything on the geographical or celestial horizon, but instead led to places where rituals were carried out to obtain water and fertile crops,” Reinhard wrote in his book The Nazca Lines: A New Focus on its Origin and Meaning.

Anthony Aveni, a former National Geographic Fellow, agrees: “Our findings clearly show that straight lines and trapezoidal shapes are related to water, but they were not used to find water, they were used as a connection to water.” the rituals.”

“The trapezoids are big, wide spaces where people can go in and out,” explains Aveni. “The rituals probably had to do with an ancient need to appease or pay debts to the gods… quite possibly to beg them to send water.”

Reinhard points out that spiral designs and themes have also been found at other Peruvian sites. Animal symbolism is common throughout the Andes area and biomorphic designs have been found drawn on the Nazca plain: spiders are believed to be a symbol of rain, hummingbirds are associated with fertility and monkeys can be found in the Amazon, an area that has abundant water.

“There is no single test that proves the truth of one of the theories about the lines, but the combination of archaeology, ethnohistory and anthropology has managed to build a solid argument,” explains Reinhard. If we add new technological research to this mix, there is no doubt that our understanding of the Nazca lines will continue to evolve. 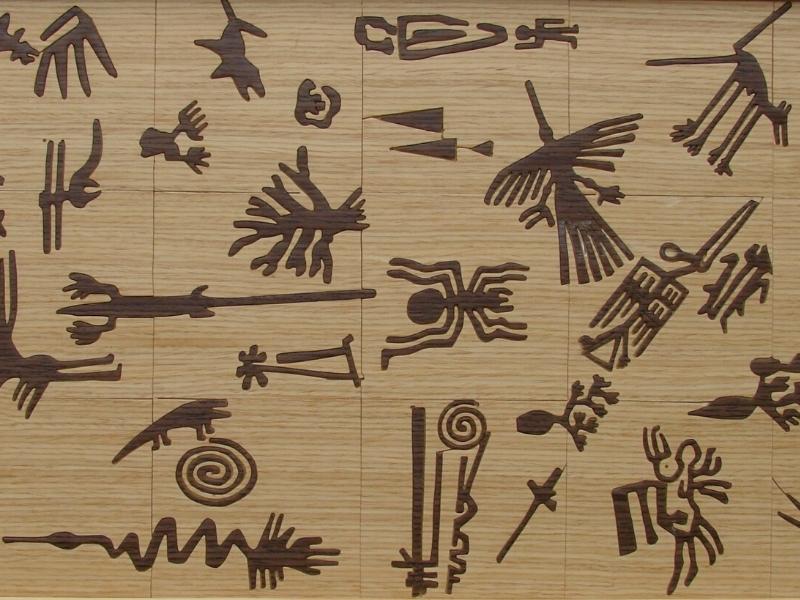 The most Popular and Striking figures of Nazca

Monkey
It consists of a figure that has nine fingers and a spiral tail; As for its size, this is 135 meters. The monkey was found by María Reiche, the German mathematician and archaeologist who dedicated her life to the Nazca lines.
For Reiche, the figure’s hands and tail are directly related to the rainy seasons and the constellations. Therefore, the monkey is believed to be a representation of the Big Dipper.

The hummingbird
Probably the most popular image of Nazca. It stands out among the others for the symmetry of its lines. Archaeologists have been able to calculate a distance of 66 meters between its wings; this element served the Peruvian historian María Rostworowski to affirm that the hummingbird is a tribute to some flying deity with the aim of invoking the rains.

The giant bird
It is characterized by its enormous size, as it reaches about 54 meters wide and 300 meters long. Its peak is located towards the direction where the Sun rises during the month of June and has a snake neck; For this reason, researchers believe that it is a representation of a solar festival, specifically the Inti Raymi.

The spider
This figure is about 46 meters long and some claim that it was made with the aim of avoiding the dry season.

The whale
It has a size of 20 meters high and 60 meters wide. Some archaeologists have claimed that it represents a sea god.

The owl-man or the astronaut
It is a very strange anthropomorphic form, characterized by its popularity and by being overloaded with pseudoscientific theories. Pseudo-archaeologists claim that it consists of a human figure wearing a helmet; This image is used to determine that the Nazca lines were made by aliens.

The top sights of Peru will leave all the family thrilled by the scenic grandeur, ruined temples, colonial cities, amazing inca trail to Machu Picchu, the Inca Lost City, once buried under the tropical forest which surrounds it.

DIFFICULTY OF THE INCA TRAIL TO MACHU PICCHU

What our clients say about us