Be part of the tour of the INTY RAYMI or fest of the sun, in the capital of the ancient empire of the Incas, the fest of the sun is a staging of the ritual ceremony of the Incas to the sun god. It takes place in the city of Cusco on June 24 of each year. Our company will organize a tour with the best local guides with extensive experience in the Inca culture. In the Inti Raymi or festival of the sun you can learn more about the rites, songs, clothes and dances of the Incas during their maximum power. This tradition is unique since it only takes place once a year. Make your reservation in advance since the spaces are usually sold out very quickly, you just have to fill in your personal data and make a reservation deposit.

INCLUDED IN THE TOUR OF INTY RAYMI: SUN FEST OF THE INCAS

The tour begins with the pick up at your hotel in the city of Cusco at 8:00 am. Then we go to the temple of the sun “Qorikancha”, that is very close to the downtown. Once there we will settle on seats to appreciate the first ceremony of the festival of the sun, it is a greeting made by the Inca king to his main deity the “Apu Inti P’unchao”, in which the 4 “Suyos”  or regions of the ancient Inca empire will participate. Then we will go to the Cusco square where the second ceremony awaits us, which consists of the offering of the sacred coca leaves, and the invitation to make the greatest cult of the sun in Peru, in the hills of the Sacsayhuaman. At 13:00 pm the third stage of the Inti Raymi will begin, in the great esplanade of Sacsayhuaman, we will have one of the best locations in the seats that are reserved in advance.In this sector the Inca emperor will begin the most important rites such as it is the greeting to the mountains and gods with the  their sacred drink “chicha” is a kind of beer made of maiz, then the Sanqhu “Inca muffin”, and the lighting of the sacred fire. Finally it culminates in a party of joy and dance at 15:00 pm. Then you will be returned to your Hotel.
All the ceremonies will be accompanied by an expert guide in the culture of the Incas who will explain and translate everything that the priests and important people of the Inca elite speak, in the language of the Incas, Quechua. 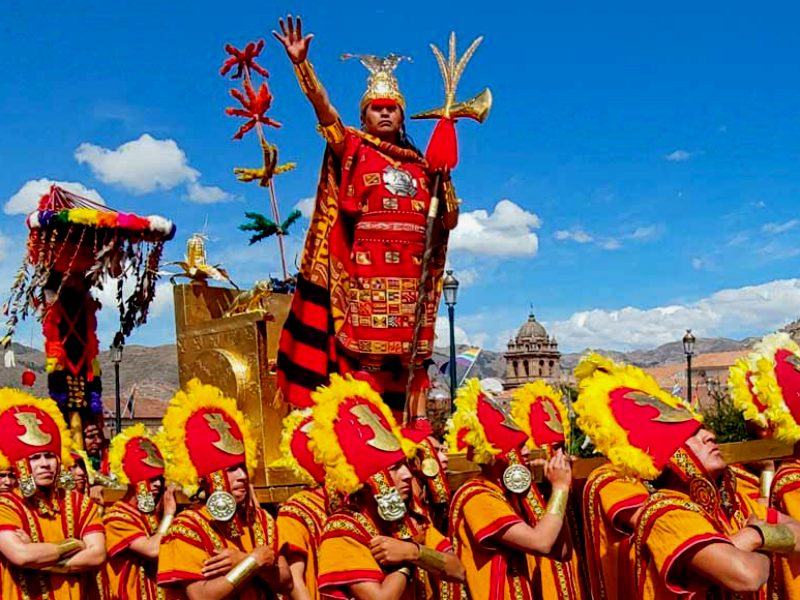 SUN FEST OF THE INCAS

Inti Raymi is the celebration of the sun fest, wich is the most important, today the people of cusco are still celebrating with colorful clothes and sacred rituals.