Trek to Choquequirao, the lost city of the Incas 4 Days

Trek to Choquequirao, the lost city of the Incas 4 Days

The Choquequirao trek is an adventure in the truest sense of the word. Sitting high in the Vilcabamba mountain range, the 15th-Century Choquequirao Archaeological Complex is only accessible by foot. And while Choquequirao closely resembles Machu Picchu with terraces, temples, plazas, and aqueducts, there is one very noticeable difference between the two: Machu Picchu gets around 3,300  visitors per day, while Choquequirao sees an average of only 15 to 20.

The Choquequirao ruins are all of the things you want in an archeological site: beautiful, mysterious, extensive, unique, fascinating, etc. They have been classified successively as a fortress, a ceremonial center, a city and the last residence of the Inca.In Quechua, Choquequirao means “cradle of gold” and many theorize that there were gold mines nearby that were exploited during the Inca Empire. However, as with so much Inca history, the original name of the site is still lost in the time.

Like all Inca cities, it includes a main plaza, royal quarters for when the Inca visited, a temple for the sun, large buildings called kallankas, storage buildings called collcas, platforms called ushnu, barracks for soldiers, a prison, walled-off houses separate from the rest of the site for priests, an administrative center and lots and lots of terraces for agriculture and hillside stabilization.The most famous part of the ruins are terraces with white quartz llamas built into the walls.

INCLUDED IN THE CHOQUEQUIRAO TREK 4 DAYS:

The hike to Choquequirao is challenging, especially because of the rugged geography where the winding road crosses, uneven slopes with little oxygen from 3,000 meters above sea level down to 1,500 meters above sea level and again rising above 3,000 meters above sea level. And this adds to the distance, since the path passes through places where there is no presence of people. This walk demands a good will and important physical activity to be able to face it, you must be accustomed to daily exercises, walks, bike riding, in a nutshell this route is considered as difficult. The way to get there is walking a lot and camping, you will challenge climates from cold in the heights or walking in the intense Andean sun.

The overnight stays during the Choquequirao Trek are made in double-roofed tents, which are installed by the accompanying team. The tents are equipped with thick foam mattresses that are carried by the horses. On your Choquequirao trek you will have a tent with your portable toilet, in the camps, these are always clean and you can use at any time. A dining tent offers enough space to eat together and end the evening in peace.

We will pick you up from your hotel between 3:30 to 4:00 AM to start our trip in a private van for 4 hours to northeast of Cusco city, through small towns until Capuliyoc town (2.800masl) where we have a delicious breakfast and where also we will meet with our trip staff (muleteers and horses).

After breakfast we begin with our hiking for about 20 minutes and will arrive to our first viewer where we have a panoramic view, in front of us we can see the vilcabamba mountain range called ( padreyoc) and the famous Apurimac Canon, after having an amazing view we will start our descend for 3 hours through beautiful landscapes where you will be able to see different medicinal plants which were used by our ancestors ( muña, chilca and different varieties of plants) If we are lucky we will be able to see the majestic Condor, we descend until Chiquisca Hamlet (1800masl) where we have a delicious tipycal Cusco Lunch Buffet.

After having Lunch we will have a 30 min break to continue with or hiking, Descending 45 minutes more until Playa Rosalina (1700masl), located in Apurimac River. After passing the famous Apurimac river we continue hiking uphill a zigzagging road for 4 hours until Marampata (3500masl), at sunset we will see andean people, how they live in the mountains with a style of life that maybe you wont believe compared to the city. We will arrive to our camping site at 5:30 pm, after a small break its time for dinner, during the night you will be able to see constellations according Andean or Inca religión. 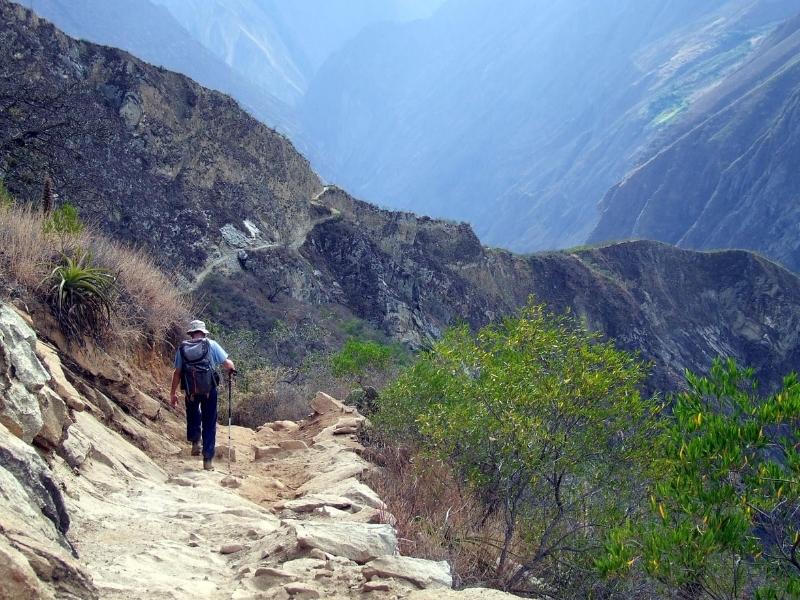 After breakfast, we will continue with our hiking to the ruins of Choquequirao, on this day the hiking is going to have a high level physically, where we will be able to see an amazing view of the Archeological Choquequirao Complex (3100masl) we will have amazing canon views. Choquequirao is also knew as the lost city of the Incas, we will visit the magnificent archeological site of Choquequirao for the entire day.These ruins are three times the size of Machu Picchu and new sections, hidden under the dense jungle, are constantly being discovered. Enjoy the private guided tour and explore all of the beautiful sections of the temples, terraces, palaces, the llamas’ section, and much more.

After to visit all of this places we will start our descend until Choquequirao Camping where our picnic Lunch is waiting for us, after having lunch we will take a 30min break and continue to an amazing place that only us know about it, this place is called cataratas de Pachayoc (water falls) a place where you will be in touch with the nature. Finally we will return to Marampata where dinner is ready and is time to stop over. 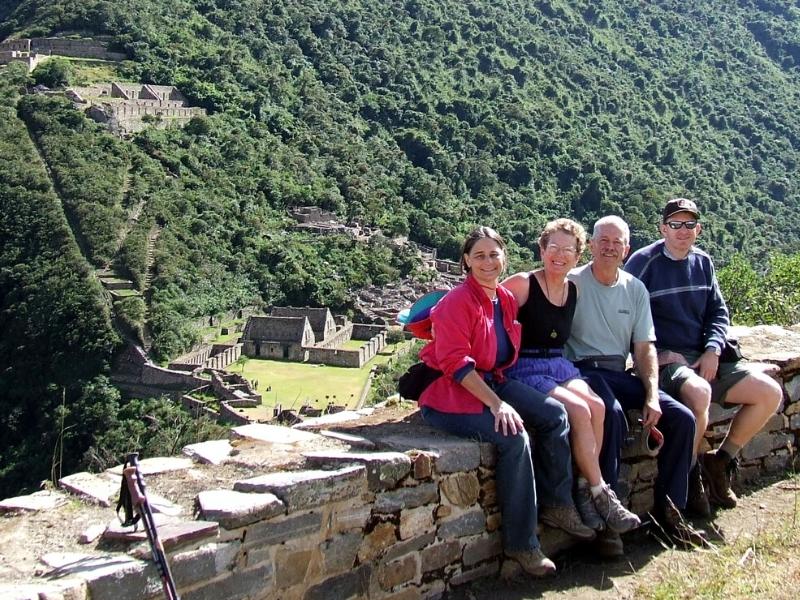 This morning we say goodbye to the Choquequirao ruins, and have a chance to spot condors soaring through the morning air as we make our way back along the Choquequirao trail. We’ll go downhill for about 2 to 2 ½ hours to the Apurimac River (1520m / 4986 ft) which we’ll cross. From here we’ll go up to Chikisca (1950m / 6397ft) for lunch. After a short break we continue with our hiking to Cocamasana (2450m / 8038ft) you will arrive around 4:00 pm. Here we’ll also have our tea and dinner and the rest of the time to relax a little. 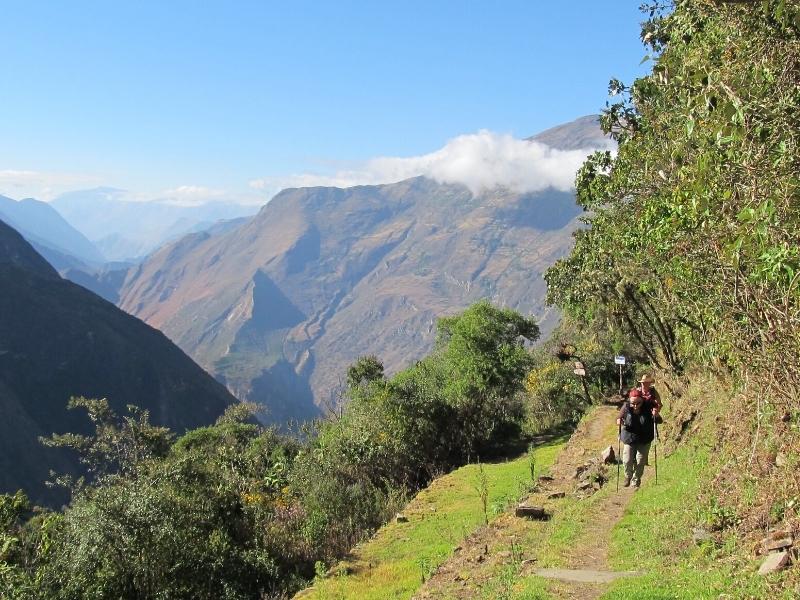 This morning, we finish our Choquequirao trek , after early breakfast you will get ready to return to Cusco. It will be the last 2 hours uphill to arrive to the end of the trek. When we reach our destination, we’re once again rewarded with spectacular views. You will say goodbye to your team, and then we return in our private car to Cusco 4.5-hour drive, dropping you at your hotel. Today we have lunch on the way. 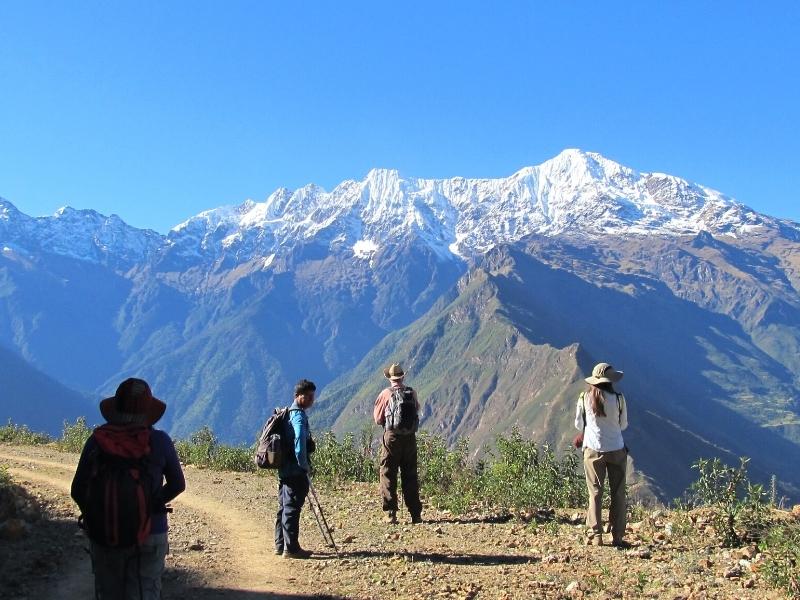 WHAT  YOU NEED TO BRING TO THE CHOQUEQUIRAO TREK  4 DAYS

Want an in-depth insight into this trip? Essential Trip Information provides everything you need to know about this adventure and more.

The Ancascocha Trail to Machu Picchu in the Peruvian Andes is a remarkable trail that remains off the beaten path. It is listed as one of National Geographic’s 20 dream hikes on their World Best Hikes list.

The walk from Huchuy Qosqo to Machu Picchu, is one of the shortest in Cusco, but full of unique landscapes, and towns with ancient traditions. This circuit is recommended for tourists who want to know little-visited places, with a camp from where you can see a unique sunrise of the Sacred Valley of the Incas.